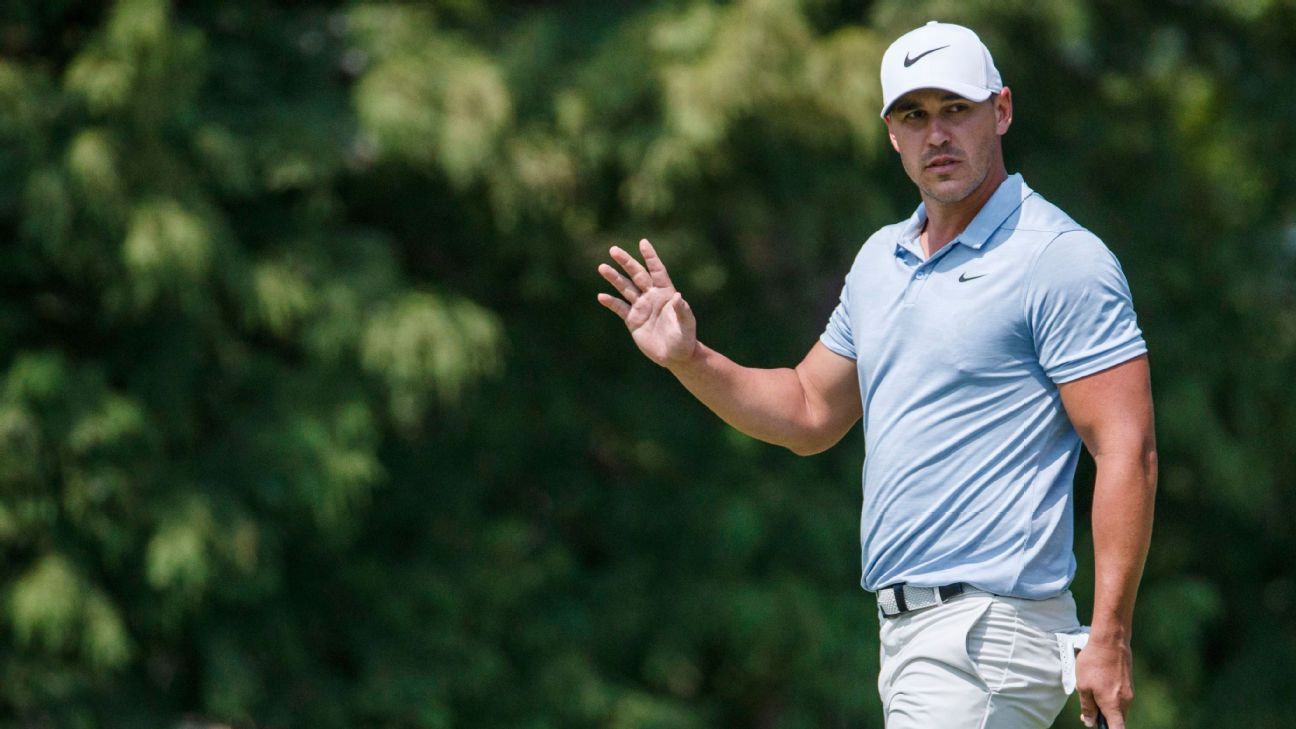 The surprise is not that Brooks Koepka was named PGA Tour player of the year on Tuesday.

No, the surprise is that Koepka was a player at all in 2018 — and the craziness the enveloped his season.

Koepka packed a lot into the past 10 months, some of it not of his own doing, but a good bit of it due to his stellar play in winning two major championships, all but making him a lock for the Jack Nicklaus Award.

Winning the U.S. Open and the PGA Championship took all the suspense out of Tuesday’s announcement, such is the importance placed on capturing the game’s biggest tournaments.

But the events of the past two weeks added an unexpected twist to what was already an interesting year for Koepka, 28, who found himself in the middle of media reports of a fight with friend Dustin Johnson. And that occurred just a few days after a tee shot he hit at Le Golf National struck a spectator, who lost the use of her right eye as a result.

Koepka said he was “heartbroken” over the news of the spectator’s injury that occurred on Sept. 28, the first day of the Ryder Cup.

Two days later, he was reported to have been involved in a skirmish with Johnson — who appeared with him Tuesday on behalf of the PGA Tour in accepting his award — in the European Tour room, a story he denied at the Dunhill Links Championship last week and in various interviews on Tuesday.

Congrats to BK @BKoepka on POY honors. Extremely deserving and played some unbelievably clutch golf at the biggest stages all year. Go lift some weights to celebrate 💪🏽

All of this comes just six months after Koepka was on the couch at home during the Masters, missing the first major championship of the year with a left wrist injury that he feared could impact his golf future.

“There were no assurances” that everything would be OK, Koepka said recently. “I think for as many times as I was [in the doctor’s office], nobody knew. It ended some guys’ careers out here, the injury we had.

“Sitting back … I was in a soft cast for two months. And I’m watching everybody else play. I’m looking at the injuries that some of these guys have had and I kept trying to think positive and just see where I am. And I remember when I took the soft cast off, and I went to push down on the shampoo bottle or soap bottle, and it hurt to do that. I was like, man, I’m in for a really long recovery.”

Brooks Koepka says that reports of an altercation at the Ryder Cup with Dustin Johnson are false and that Johnson is one of his best friends.

It started late last year after what appeared to be a successful end to 2017. Koepka had just won the Dunlap Phoenix, a tournament on the Japan Golf Tour, and was at home preparing for the Hero World Challenge when he felt pain in his left wrist.

The injury bothered him throughout the Hero week in the Bahamas, where he finished last in an 18-man field. When he finished last again among 34 players at the Sentry Tournament of Champions in January, Koepka decided to step away — a period of 15 weeks during which he did not touch a club for 90 days.

He didn’t return until late April, and then less than two months later, he won the U.S. Open at Shinnecock, becoming the first player since Curtis Strange in 1988-89 to repeat.

When he won the PGA Championship in August at Bellerive, he became the first player since Jordan Spieth in 2014 to win two majors in the same year.

And yet, all along he felt unappreciated. He noted how little fanfare he received when he was defending his title at Shinnecock. And at the Tour Championship, he was surprised he was not among players requested for a pre-tournament interview, given the year he had just produced.

“You just have to move on and use it as motivation,” he said.

Koepka’s player of the year honor was via a vote of PGA Tour players. He finished ninth in the final FedEx Cup standings after posing six top-10 finishes during the season, including his major championship victories. His only missed cut came at the Canadian Open.

Among the top U.S. players at the Ryder Cup, Koepka went 1-2-1, winning with Tony Finau on the first day and then getting a half in his singles match with England’s Paul Casey as part of the lopsided American defeat.

It was a tough end to the season, made more so by the spectator injury and then the reports of an incident involving Johnson during a gathering of players from both teams following the Ryder Cup.

Tuesday’s honor simply capped what was an eventful year for Koepka.

How To Stop Hooking The Golf Ball
At-home golf tips: How to effectively practice your putting stroke indoors
Jim Nantz is just like you—a disappointed golf fan missing this week’s Masters
BEST GOLF LESSON: Contrarian Idea That Will Increase Consistency
SHOULD YOU SHIFT WEIGHT WITH YOUR DRIVER?